Friends and readers of The Possibility of Lions have been contacting me to point out the similarities between the plot of my novella and the recent, tragic events in Ohio where Terry Thompson took his own life after freeing his menagerie of exotic animals. Real life has been much stranger and much crueller than fiction in this case: I don’t think my imagination could have come up with the sad series of events that lead to the suicide of one desperate man and the death of so many animals. Thank goodness. 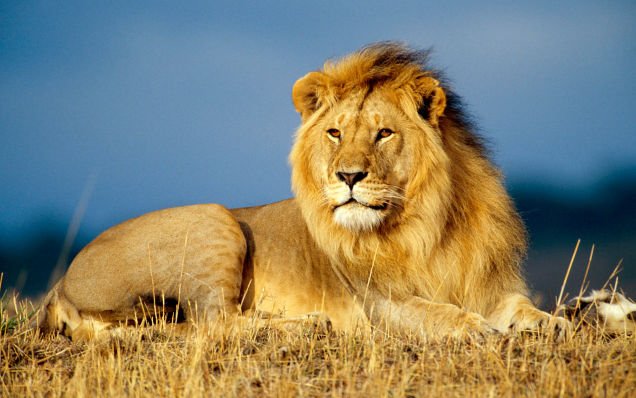 But PoL does have its roots in fact. It fuses my own experience of coming to California from war-torn Nigeria with part of another story I uncovered during my researches into newspaper archives in the Kern County Library. As I clicked though pages of scratchy microfiche images, I was surprised to run across articles about a Belgian entrepreneur who came to Bakersfield in 1961 with a proposal to create a wildlife park nearby, much like Safariland in my story.

His name was Jean-Pierre Hallet and he did indeed have an African lion with him, Simba, plus a baby chimpanzee who went by the sweet name of Sophie. Bearded and bush-jacketed, Hallet was handsome, charismatic and exotic. There are many pictures of him in the archives, kissing Sophie and wrestling with Simba (who was actually born in the Fresno Zoo). Reading between the lines, it looks like the whole town was in love with the suave colonial and with the idea of having an animal park on its outskirts. Even at a remove of decades, I could feel the excitement and imagine what it would have been like to live with such a thrilling attraction on our doorstep, bringing Africa to the dull plains of the San Joaquin Valley. For a time Hallet’s dream seemed destined to become reality.

Yet I grew up in a place where wildlife extended to a few bluebellied lizards and the occasional praying mantis, and where, apart from the odd coyote, the native fauna had long been killed off or driven away. Hallet’s wonderful game park never came into existence. His vision unravelled in a nightmare of red tape, litigation and broken promises—he writes about it with justifiable bitterness in his book.

“By actual poll, 90 per cent of (local people) had wanted to see the African animal sanctuary established in Kern County….But the people had been defeated by a misinformed minority that lacked all understanding and sympathy for so-called wild animals. They had lost out to the ‘sportsmen’ who wanted public lands reserved for hunting; to the association of of property owners who lacked the vision to see what Disneyland had done for Anaheim, less than 150 miles away; to the cattlemen who feared ‘exotic diseases’….and to the crackpots who denounced ‘naked chimpanzees’ or worried about ‘uninhibited Africans’ bursting into their bedrooms.” From Animal Kitabu by Jean-Pierre Hallet

So that was the end of Africa in the Central Valley–and perhaps, with hindsight, it’s not such a bad thing that big game was never let loose to roam beside the Kern River. Yet it was far from the end of Hallet, who was a much more extraordinary man than his somewhat shady dopplegänger in my novel, Anatole Hachette. After the Bakersfield fiasco, Hallet went to Los Angeles where he donated his large and distinguished collection of Central African Art to the UCLA Museum of Cultural History, now the Fowler Museum, where you can still see it today. He settled in Santa Monica, opened an African art gallery, wrote several books and appeared 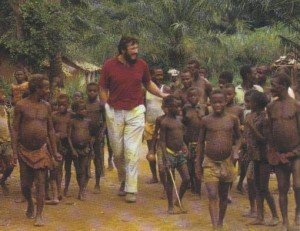 Jean-Pierre Hallet with the Efe people

in documentaries. He also devoted the rest of his life to campaigning for the rights of the Efé people, a Congolese pygmy tribe. His good works on their behalf earned him international recognition including a nomination for the Nobel Peace Prize.

Hallet died in 2004. He is warmly remembered by the many people who knew and admired him. Bakersfield, it appears, forgot about him as soon as he packed his mask collection and settled his bills. I can find no record of what became of Simba. Perhaps he returned to Fresno to lick his wounds. Let’s hope so.